A new author appeared on the self published book scene, who brought more than just a few good ideas. She didn’t just create a new world, but also did it with her own way of telling the story. With her first person narrative and special language, the book might be unusual at first, but it works out perfectly. Please, everyone welcome Quoleena Sbrocca.

Please tell us a little about yourself?

I am a Denver native. I live in the city with my husband and our two boys, age 10 and 2. I went to San Diego State University where I was a dance major. 10 years later, I earned an MFA in photography from the Academy of Art University in San Francisco. I’ve always loved creative writing. By the time I was a senior in college, I knew I wanted to write a book. It was sort of on my bucket list, because I never had an idea for one until the summer of 2014. Now I’ve published my third!

Do you outline your novel before you start writing or do you prefer to just begin and see where your ideas take you?

For this one, I had the basic concept and world building in notes, just to make those ideas tangible. I knew how the book was going to start and end. I also had a couple plot points planned. Beyond that, I just sat down and typed and let it flow wherever it wanted. My original ideas and the first draft are very different from the finished product, and I love that. Since this was fantasy, I thought that writing it free like this and let the story go where it wanted fit perfectly. For my first two novels, in addition to all the historical research, I knew how it would begin and end. I also plotted each chapter as I went along, hitting some plot ideas along the way. I think I prefer the freedom of writing it and seeing where it goes. I’ll definitely do it this way again for the second book in the Rayne trilogy.

Who is the writer or the book that influences you most in your works?

This is a bit hard to answer. I don’t know if I have any books or authors in mind when I start writing or think of a story. I will say this though. Unrelated to books, I absolutely love [director Bryan Singer’s] XMen movies and all things Avengers. I suppose it was only a matter of time before I created a character with superpowers.

As for dialog, I have a crush on the English culture and their manner of speaking. One of my favorite authors is Jane Austen. While the dialog of Rayne isn’t in line with how, for example, the Victorian-era English spoke, their manners are similarly reflected in their style of speech.

I’ve always been a huge Stephen King reader, too, but my favorite book of all time is the 1492-page doorstopper, The Count of Monte Cristo. I love Dumas’s books and his mix of dialog to advance the story, action, description, and of course the characters. So, perhaps Alexandre Dumas is my biggest influence. Yes. Definitely.

You are currently working on two series. One related to time travel, the other is in a future world, where homo sapiens is superseded a new step in human evolution. What draws you to these worlds?

I’ve always been interested in the concept of time travel. Long before I ever thought about writing a book, I wondered how an American slave would view present-day USA. Fast-forward to the spring of 2014 when my son and I were gobbling up each episode of Cosmos, hosted by Neil deGrasse Tyson. In August 2014, my son and I went outside late at night – him barefoot and in his pajamas – to see the supermoon and perseids meteor shower event. A week or so later, I was driving home from my martial arts class (in the pouring rain – yes, really), when an idea for a book popped into my head: natural time travel made possible by a celestial event which occurs (in fact) every four and five years. And who would be the time traveler? A young Harriet Tubman.

As for Rayne, I had just finished the second book, featuring Jimmy Hoffa as the time traveler. I wanted to step away from the historical-type fiction and write something from pure imagination without the obligation of historical research and authenticity of historical figures. My initial idea for Rayne was much more tame. Then I remembered that I’d kept a list of what I thought the distant future might be like. Given my obsession with Marvel Comics movies, I decided, “What the heck, go wild.” I didn’t want to copy the greatness of Xmen, so I took a different approach with my ability-possessing characters of Rayne.

Do you have plans for other books or series? Are you planning to keep the genre?

I’m not allowing myself to think beyond my two present series. I’m pausing working on the time travel series until I complete the Rayne trilogy. Once I’m all done with that, I’ll write the final time travel book.

It’s funny because writing a book was sort of a bucket list thing for me. When I published my first book, I thought that was it – I had no more ideas. It’s a year later, I’ve published three books, and I have three more on the table. I should say that I’ve already begun writing the second book in the Rayne trilogy.

While I won’t allow myself to think ahead to what story I’d like to write once these are complete, I do know that I’d like to stay in the YA fantasy genre. I enjoy reading those books the most, so it makes sense for me to write it too.

As probably everyone expects it by now, the book that really captivated me is Rayne: Luminescense. Let’s talk about it now. 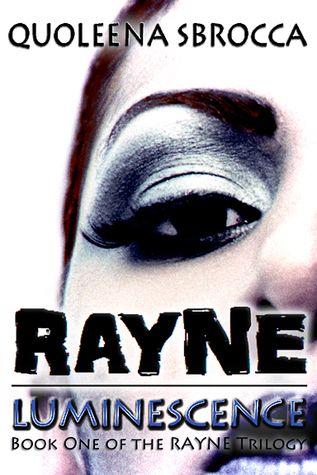 Who is your favourite character?

My favorite Luminescence character to write was Rayne’s dad, Roman. I didn’t want him to be just distant with her. I wanted to hint at layers and good intentions beneath his attitude and to show that perhaps he’s distant with her because someone else tends to get in the way of him bonding with her (her only friend, Rafe). My favorite character overall might be Sir Theo. I’d love to have a sort of mentor like that. Diamond was fun to write, too. I wonder what secret she’s keeping!

It’s always a challenge for an author to make short summaries. After all, they wrote a whole book to tell or express something. Could you sum up Rayne: Luminescence in two sentences?

Rayne is set in the distant future, with a new species of mystical ability-possessing humans. The book covers a period of a week, where Rayne discovers her own latent abilities, more powerful than any other.

Would you like to see your book as a movie or animation? Can it be reasonably recreated on the screen?

On the big screen with tons of CGI! I picture it sort of like Avatar in that way with the actors tethered to pull off the leaping and fearless climbing ability of the humans of the future. And then there’s the master eagle.

Who are the key characters? Who would you cast for them and why?

Rayne would be an up-and-coming actress with an obscure racial identity and “deep-tan skin”; Yunjin Kim (Sun from the Lost series) as her mother Lady Sapphire; Ken Watanabe as her father Sir Roman; Theo James (Four/Tobias from the Divergent trilogy) as Rafe; someone like Tom Felton (Draco Malfoy) or Jack Gleeson (Joffrey Lannister) as Jhonis.

You created a whole world with many details. Their own present and connection to their past. What kind of ‘contemporary’ music would best fit that world?

The music which best fits their world isn’t contemporary. It’s classical music, which I mention in parts of the book. Rayne’s favorite “rock” group is a female quartet consisting of a violinist, cellist, bassist, and operatic vocalist whose fashion style is Emo. While they are a classical music band, their style is louder, faster, and more hard core than the days of Verdi, Mozart, and Bach. Picture an Emo, female, less-metal version of Metallica instumentals.

I created a world where the evolved humans share the values of historical figures like Confucius, Aristotle, Socrates, Nightingale, da Vinci, Tolstoy, Mother Teresa, Mandela, and Gandhi. For me, classical music was the most logical and appropriate style for their world.

Writers create stories, but stories also influence the writers. Is there anything that Rayne: Luminescence changed in you while writing the book?

While I do know I had a couple “aha moments” over the course of writing it, I’m at a loss to recall exactly what they were. I will say that how I imagined the book would go changed a lot. The characters changed a lot. I had plans for how certain characters would be/act/react, but it changed along the way. I realized my original ideas for them wasn’t in line with who these characters turned out to be. I couldn’t make them say something or react in a certain way just because I’d pictured it that way, however vaguely it may have been. I learned more about them along the way, so I adjusted accordingly, even going back to rewrite some scenes after finishing the earlier drafts.

For example, I didn’t know what Rayne’s dad’s ability was until well into the editing phase. I didn’t want to just pick one for him. It was always there “on the tip of my brain.” When I finally figured it out, I went back to the second chapter and made some allusions to it.

I also learned an interested fact about Rayne somewhere in the final editing rounds: what her greatest fear is.

Language and way of communication is a crucial part of the book. Do you like learning languages? Are languages also present in your life?

I love languages. From 8th grade through my junior year in high school, I studied Latin. I also studied French all four years in high school and my first two years in college. Back in 2012 before I went to Rome, I decided to learn a bit of Italian several months before the trip. I fell in love with the language.

In the book you described horse riding and flying quite vividly. I had the feeling that it was you behind those experiences and feelings. Is this true?

Horses are my favorite animal, but I’ve only ever ridden horseback a handful of times in my life. Every time I did, I was a bit timid because of horror stories and the bit about horses smelling fear. In order to write those scenes, I had to research about horse behavior. I was definitely living vicariously though Rayne.

As for the master eagle, I’m deathly afraid of heights! I refuse to be high above the ground without being secured to whatever surface I might be on. Then again, I also used to be afraid of deep water (I was traumatized as a child). Then one summer I went scuba diving to get over that fear, and it worked. I suppose I could try sky diving, but I’d likely not ever jump. Even flying in airplanes causes me a bit of anguish. I was definitely playing opposites when I wrote those flying scenes. In fact, Rayne isn’t afraid of heights at all.
As someone who’s afraid of height, you described it quite well! I guess, there is a hidden eagle deep within you…
Thank you for the interview. We are looking forward to see the second book of the trilogy published.